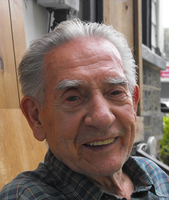 Robert T. O'Neill Montour Falls: Robert T. "Corky" O'Neill, Transitioned from our physical world May 4, 2019. He was 90 years and 354 days old. Born in Cleveland, Ohio, he lived most of his life in Elmira, NY. He served in the US Army in Korea. He was educated at Pennsylvania Academy of Fine Art in Philadelphia, PA. A treasured member of the area art world, he has been exploring the corners of his mind all of his life and translating what he finds there into art. His creativity lent itself to many different styles and mediums. Unbridled in his approach, for him art was a discovery of himself and life, and it permeated his life. An inquisitive and curious mind posed "Corky" to approach any idea with an adventurous attitude toward exploration. The results produced artworks which displayed trails of his journey. He said, "The purpose of creating is to share with the world, and in my exploration of life, it is the most valuable thing that I have to give. It gives me joy to see other people appreciate my work. It is a part of myself." He previously owned a small studio in Waverly, NY, then moved to Montour Falls, NY, and opened another art studio in his home while still enjoying his other past times, chess and storytelling. His ever willingness to mentor other artists was appreciated and will be missed by many. In 2015, he merged his art endeavors with the Agustssons and opened their current gallery at 104 N. Catherine St. in Montour Falls, NY. He is survived by his brother, Pat O'Neill, of California; and his sister Loretta West, of Florida. A retrospective of his work and memorial celebration will be announced at a later date. Arrangements are entrusted to the Baird Funeral Home in Dundee, NY. Online condolences can be sent by visiting www.bairdfuneralhomedundee.com.