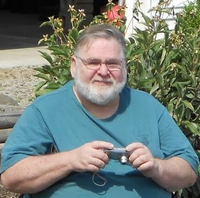 Larry R. Riekofski Penn Yan: Larry R. Riekofski, age 75, of the Town of Barrington, Penn Yan NY, passed away at Arnot Ogden Medical Center on November 10, 2021 due to a long illness. He was born in Hornell NY on November 18, 1945 to the late Robert H. Riekofski and Elinor (Towsley) Riekofski. Larry graduated in 1964 from Jasper Central School and continued to keep in touch until his death, with numerous classmates which brought him joy. Immediately after graduation he served in the U.S. Army, and was honorably discharged in 1967. Larry met the love of his life, Marjorie Leach, as youngsters and they were married on February 5, 1966. In his spare time, he loved cars, watching NASCAR and western movies. But his greatest joy was spending time with family. His faith in Jesus Christ took him through many years of illness. Larry was a hard worker as he spent his years working on a farm and later in life, driving long distance for Doug Marchionda Trucking retiring in 2008. His nickname on the road was "Bigfoot" and many a drivers knew him well, with surely many stories. Larry is survived by his loving wife of 55 years, Marjorie, and his adorable fur baby, Holly May at home; 2 sons, Eric (Kerry) Riekofski, Steven (Becky) Riekofski; 2 granddaughters, Kassandra (Christian) Garcia, Cassidy (James) Papia; his step-mother, Pauline Stanford; siblings, Danny (Suzanne) Riekofski, Robert (Amy) Riekofski Jr., Kay (Larry) Padden, Denise Robinson, Calvin Riekofski, and Kevin (Cassie) Riekofski; and numerous nieces, nephews, extended family and friends. Honoring his wishes there will be no public calling hours or services. In lieu of flowers, contributions can be made to Barrington Community Church P.O. Box 73, Dundee, NY 14837. Arrangements by the Baird Funeral Home, 36 Water Street, Dundee; to leave online condolences and memories to the family visit www.bairdfuneralhomedundee.com.