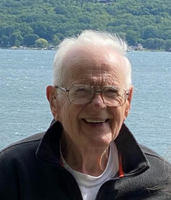 John Adams McDowell, Sr. Glenora: John Adams McDowell, Sr., passed away at Seneca View Skilled Nursing in Montour Falls, NY on July 10, 2022 after a brief illness just two months shy of his 100th Birthday. John was born in Elmira, NY to Ruth Adams and Robert Pitkin McDowell. As a boy, he played the flute and piccolo, had a paper route, attained the rank of Eagle Scout, and sailed with his three brothers during summers on Seneca Lake. John graduated from the Elmira Free Academy in 1940 and the Mount Herman School in 1941. He then matriculated at Syracuse University but was transferred by the Navy to finish his schooling at Rensselaer Polytechnic Institute where he graduated with a Bachelors Degree in Mechanical Engineering in 1944. While at Syracuse, he joined Psi Upsilon fraternity. John went on to obtain an MBA from the Harvard Business School in 1948. He spent his career working as a professional engineer in the defense industry and later in solid waste management and was very proud of his professional engineering license. He was a veteran of World War II having enlisted in the Navy's ROTC program in 1942 while a student. Upon graduation, he was commissioned as an Ensign in 1945 and went on to serve in the Navy in World War II participating in the US occupation of Japan at Tokyo Bay. He served in the Naval Reserves for another 20 years and eventually retired achieving the rank of Lieutenant Commander. John was honored to be a part of an Honor Flight to Washington, DC in October 2014. John was predeceased by his parents and three brother (Robert Adams, Willard Boyd, and Boyd II). He was also predeceased by his wife Catherine Marston Bunn McDowell in 2011 after almost 59 years of marriage and his second wife Faith Haight McDowell in 2021 after five years of marriage. John and Catherine raised their family in East Williston, NY where John was active in The New York State Society of Professional Engineers, the Community Church of East Williston, the Community Concerts, and the Boy Scouts. In 1988, John and Catherine retired to Seneca Lake where John continued to volunteer with the Lakemont Congregational Christian Church and the Glenora Music and Art Festival while also being a member of the Starkey Planning Board. John loved opera, dogs, family visits, chocolate, yard work, and his beloved home, Lasata. He is survived by his children Carol McDowell Shaheen (Joseph John) of New York, NY and Avalon, NJ and John Adams McDowell, Jr of Seattle, WA and thirteen nieces and nephews. His children would like to thank the staff at Seneca View for the tireless and compassionate care they provided John with through the 17 months he resided there. Services will be held privately at the convenience of the family. Memorial contributions may be made to Schuyler Hospital Foundation (please reference for the benefit of Seneca View Skilled Nursing in memory of John McDowell), 220 Steuben Street, Montour Falls, NY 14865 Arrangements entrusted with the Baird Funeral Home 36 Water St. Dundee, NY; online condolences can be sent by visiting www.bairdfuneralhomedundee.com.