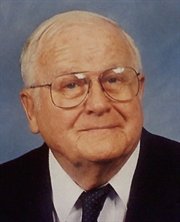 Please share a memory of Ralph to include in a keepsake book for family and friends.
View Tribute Book
Ralph H. Whitehead Dundee, NY/Tequesta, FL: Ralph H. Whitehead, age 91, of Dundee, NY died Tuesday January 17, 2012 in the comfort of his winter home in Tequesta, FL., surrounded by the love of his extended family there. Honoring his wishes there are no calling hours. A private prayer service was held in Tequesta. A graveside memorial service with Full Military Honors will be held at 11:00 a.m. Monday July 16, 2012 in Pleasant View Cemetery, in Reading Center, NY . Ralph was born August 22, 1920 in Watkins Glen, NY, the son of the late Jesse and Jane Haring Whitehead. He graduated from Watkins Glen High School in 1936. He continued his education at Cornell University, receiving his Bachelors Degree and ultimately his Masters Degree in Education in 1951. He proudly served in the U.S. Army 9th Infantry Division in Europe during World War II, describing himself as one of the Citizen Soldiers walking and fighting their way across Europe as recounted in the landmark book of the same name by Steven Ambrose. The extent of his service to his country is reflected by the multiple decorations he was awarded, including the Silver Star for gallantry and Purple Heart with 3 Clusters for the multiple wounds he suffered in combat. After completing his service he returned to New York, where commencing in 1946, he taught Agricultural Engineering at Ovid Central School before accepting a position as an Engineering Professor at Morrisville State College, in Morrisville, NY; where he worked for 28 years, retiring in 1983. He loved teaching and his students and enjoyed recounting their experiences and accomplishments throughout the entire period of his retirement. His students' affection for him was obvious and was in full evidence when his Morrisville Alumni friends feted him at a wonderful 90th Birthday party 27 years after he retired, with dozens of his students from over the years in attendance. Mr. Whitehead was a member of the Dundee Presbyterian Church, and attended the First Presbyterian Church of Tequesta, FL. Throughout his life he enjoyed traveling the world and cruising with his brother Walter, his good friends Gloria and Cy Meyer and his adopted Jacoby family. He was preceded in death by his parents Jesse and Jane, his brother Walter and his closest friend Bob Jacoby. He is survived by his adopted family; lifelong friend Polly Jacoby, her sons Rob (Biby), Bill (Holly) and Jim (Jo Ann) Jacoby to all of whom he was a second father and their children Jolie (Jim) Woodard, Hope, Jennifer and Kristen Jacoby, and a recent fourth-generation addition in Juliette Bailey Woodard, who were all blessed to love him as a grandfather; his close friend Gloria Meyer; and countless other neighbors and friends too numerous to mention. In lieu of flowers memorial contributions may be made to the Dundee Historical Society, P.O. Box 153 Dundee, NY 14837 or Hospice of Palm Beach County, 5300 East Ave, West Palm Beach, FL 33407. Arrangements are by the Baird Funeral Home, 36 Water Street, Dundee., NY. Online condolences can be sent by visiting www.bairdfuneralhomedundee.com .
To plant a beautiful memorial tree in memory of Ralph Whitehead, please visit our Tree Store

Look inside to read what others have shared
Family and friends are coming together online to create a special keepsake. Every memory left on the online obituary will be automatically included in this book.
View Tribute Book
Services for Ralph Whitehead
There are no events scheduled. You can still show your support by planting a tree in memory of Ralph Whitehead.
Plant a tree in memory of Ralph

Share Your Memory of
Ralph
Upload Your Memory View All Memories
Be the first to upload a memory!
Share A Memory
Plant a Tree