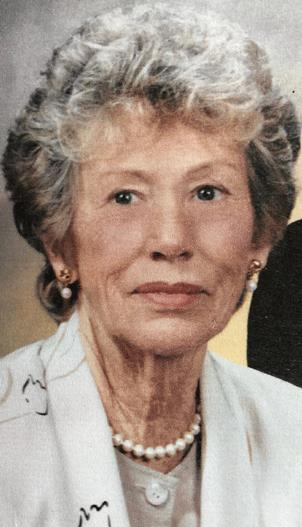 Please share a memory of Esther to include in a keepsake book for family and friends.
View Tribute Book

She was the daughter of the late Bertha Brown and Roy Walker Herrington and was born in Woodhull, NY on November 28, 1922.

After graduating high school she went to Keuka College for two years and transferred to Bucknell University earning a Bachelor's degree in Business Education in December of 1943. She taught in Painted Post and Bradford, NY before coming to Dundee to finish out her teaching career.

She met her husband Clair "Doug" Wheeler in Dundee, and they were married on July 2, 1960. They continued to make this community their home for over 50 years. Esther was an active member of the Presbyterian Church in Dundee where she served as treasurer for many years.

After retiring from Dundee Central School in the late 1970s, she and Doug wintered in Punta Gorda, Florida. In the early 2000s, they sold their home in Dundee and relocated to the Highlands Retirement Community in Pittsford.

Besides her parents, she was predeceased by a brother Merle (Nancy) Herrington, and an infant brother Clark Herrington.

Honoring her wishes, there will be no calling hours,  A joint service for her and her beloved husband Doug Wheeler will be held at 1:00 p.m. Friday Nov. 15, at the Winners Circle Event Center, formerly the First Presbyterian Church 31 Main St. Dundee, N.Y.

Arrangements are entrusted to the Baird Funeral Home, 36 Water Street, Dundee. Online condolences can be sent by visiting www.bairdfuneralhomedundee.com.

Share Your Memory of
Esther
Upload Your Memory View All Memories
Be the first to upload a memory!
Share A Memory
Plant a Tree