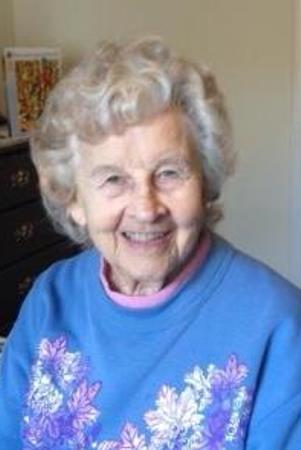 Please share a memory of Evelyn to include in a keepsake book for family and friends.
View Tribute Book
Evelyn T. Emmons Penn Yan: Evelyn Travis Emmons, 91, of Penn Yan, New York, passed away December 12, 2020 at the Homestead, in Penn Yan, New York. There were no prior calling hours. A memorial celebration is being planned for an appropriate time in the summer in Barrington. She was buried in Lakeview Cemetery, Watkins Glen, NY. Evelyn Joyce Travis was born August 27, 1929 to the late Arthur James and Mary Agnes {Knapp} Travis. Along with 7 siblings, they spent most of their growing-up years in Barrington, where their dad enjoyed farming, and they were surrounded by family. As a young lady, Evelyn joined the Barrington Community Church, and, at age 17, graduated from Dundee Central School. Soon after graduation, a young U.S. Marine, Richard C. Woodard, who had noticed her as "Queen" of the school prom, became her husband. Together, they had 5 children, Rick, Craig, Tony, Sheryl and Darlene. While raising their family on the Fessenden Farm in King Ferry, New York, Little Darlene passed away after battling cancer. Evelyn soon became a nurse and practiced as an ER nurse at Biggs Memorial Hospital, Ithaca, New York, where her older sister, Martha Jane had passed away as a child. Evelyn married Willis Emmons Jr. of Rock Stream and enjoyed country life with him for nearly 25 years. She kept the Rock Stream News alive for the "Observer" and clerked for the Rock Stream Presbyterian Church. Evelyn was very active in D.A.R., D.A.C. and her own family genealogy. Several years after the passing of her husband, "Bill", she once again became active, attending the Barrington Community Church. Jack Danielson came into her life as a dear friend and companion. Evelyn loved traveling and staying at her Florida winter home she had enjoyed with Bill. She is survived by her children Rick (Bev), Craig, and Tony Woodard, Sheryl (Tom) Little, and the Emmons children, Jim, John, Nancy, Jan, and Marge, along with 31 grandchildren, 46 great-grandchildren, 9 great-great-grandchildren, her siblings, LaVerna Lashier, Alberta Lacy, Janet Masterson, John Travis and Wanda Howell, many cousins, nieces, nephews, and friends. Along with her parents, daughter, husbands, and sister Martha, previously named, she was preceded in death by her precious granddaughter, Jennifer and her two sons; her sister Grace Wixson, and two daughter-in-laws Sandy and Jennette. The family wishes to thank the caregivers at the Homestead. Arrangements were entrusted to the Baird Funeral Home in Dundee, New York; to leave online condolences to the family visit www.bairdfuneralhomedundee.com. In lieu of flowers, consider a donation to the Alzheimer's Association. Whenever you see a bluebird, remember Evelyn. ,
To plant a beautiful memorial tree in memory of Evelyn Emmons, please visit our Tree Store

Share Your Memory of
Evelyn
Upload Your Memory View All Memories
Be the first to upload a memory!
Share A Memory
Plant a Tree