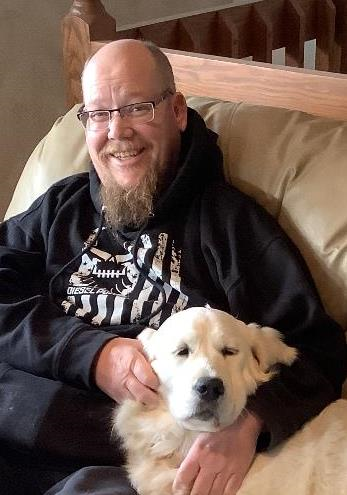 Please share a memory of Glenn to include in a keepsake book for family and friends.
View Tribute Book
Glenn M. Connon Binghamton / Himrod, NY: Glenn M. Connon, age 48, of Binghamton, NY passed away suddenly and unexpectedly on Monday August 15, 2022 at his best friends property in Himrod, NY. Honoring his wishes there will be no calling hours, or formal public funeral service. Glenn was born August 9, 1974 in Belleville, NJ, the son of the late Ian Connon and Christina Anderson Connon. He was a Diesel Mechanic by trade and passion, having been a former owner of The Corner Garage, in Lyndhurst, NJ. Glenn was a private person, if you were lucky enough to be in his circle of friends, you were considered family. Everyone knows he had a temper, but he had more of a loving and giving side of him as well. He was passionate about his dogs and what, and who he loved. Angela was the love of his life; who he cherished and she cherished him as well. Chris Reynard grew up with him in North Arlington NJ, he was like a brother to him. They shared good times and laughed and got into the usual teenager type trouble, two friends that had each other's back's. Glenn did with all of his friends and family. He loved Martial Arts and being DJ Mac back in day. Glenn loved working with Jimmy and fighting with Fran the shop cat. He enjoyed helping out with the Himrod Fire Dept during their fund raising events. Being a truck driver he drove across the United States where he found himself and came across Tommy Williams and The Peoples Club which is a group of people that look at things a little differently, and try to find out what is really going on in the world. He was a loving son to his mother who he has taken care of since 2012 when his beloved father Ian Connon passed away. He loved and spent a lot of time with his Pop Pop, and Uncle Tommy who he referred to as the original MacGyver. He looked up to his older brother Darin as a role model who got him into being a mechanic at one point in his life. He recently reconnected with his Brother Andrew after 40 years of being apart, he adored his sister Colleen, she always loved talking to him and listening to his theories on life. Glenn celebrated his 48th birthday 6 days before he passed, he had a birthday tour where he visited his good friend Alesa, who he shared the road with for many years, his sister and his Aunt Mary and Uncle's Tom and Bill. He was a good man who was loving life, and passed doing what he loved most. He will be greatly missed by all. He is survived by Life Partner Angela Efken, his mother Christina A. Connon; brothers Darin Connon, and Andrew Coleman; sister Colleen Connon, his Aunt Mary Vieth and uncles Thomas Vieth and William Anderson, best friend and brother James Sorce, and his friend Tad Smith. Arrangements entrusted to the Baird Funeral Home, 36 Water Street, Dundee. Online condolences can be sent by visiting www.bairdfuneralhomedundee.com.
To plant a beautiful memorial tree in memory of Glenn Connon, please visit our Tree Store

Share Your Memory of
Glenn
Upload Your Memory View All Memories
Be the first to upload a memory!
Share A Memory
Plant a Tree